The ingredients in Uric-X™ aid in the maintenance of proper uric acid levels.*

Uric-X™ is a unique combination of Belleric Myrobalan fruit (Terminalia bellerica) and tart cherry fruit (Prunus cerasus) that have been standardized to contain targeted amounts of bioactive ingredients that may help maintain normal uric acid status in the body.* T. bellerica is a deciduous tree native to Southeast Asia whose fruit and kernel oil have been used for centuries in Ayurvedic and ancient Greek medical traditions and is used today to support healthy uric acid metabolism.* Tart cherries contain high levels of anthocyanins, polyphenolic compounds that may help support the body’s antioxidant status.* Tart cherries also help to promote the urinary excretion of uric acid and thus, less absorption of uric acid in the body.*

Recommended Use: Take 1 capsule twice per day (once after breakfast and once after dinner) or as directed by your health-care practitioner.

Uric-X™ contains two ingredients that may be beneficial for promoting healthy levels of uric acid in the body.* Uric acid is a byproduct of normal metabolic processes. Some of it is filtered out by the kidneys and then excreted in the urine, and some is retained in the body for various purposes. However, sometimes the body holds on to excessive amounts of uric acid, and this compound may form into crystals that lodge in soft tissues, such as joints, resulting in occasional discomfort.

The ingredients in Uric-X™ aid in the maintenance of proper uric acid levels.*

(Terminalia bellerica – Belleric Myrobalan): a deciduous tree common in Southeast Asia and the Indian subcontinent. Its fruit and kernel oil have been employed in Ayurvedic and Unani (Greek) medical traditions since ancient times. The primary mechanism by which this ingredient exerts its effects is through reducing the activity of an enzyme called xanthine oxidase. This enzyme is involved in the synthesis of uric acid, so reducing its effects may result in a lower level of uric acid in the body.

Tart cherry (Prunus cerasus): helps promote proper urinary excretion of uric acid and, thus, less absorption back into the body. Cherries also contain high levels of proanthocyanidins, which are polyphenol compounds
that have antioxidant properties and are responsible for the bold red color of tart cherries. (Other foods that contain these compounds include blueberries, cranberries, red cabbage, and red and black grapes.)

Dietary Considerations
Maintaining healthy insulin levels is important for individuals who sometimes experience elevated uric acid, as insulin is known to stimulate the kidneys to reabsorb more uric acid. It may also be prudent for those whose bodies retain excessive uric acid to reduce or avoid alcohol consumption, as alcohol may aggravate uric acid levels. Dietary protein contains a compound that is metabolized into uric acid, so some individuals who have difficulty maintaining healthy uric acid may be advised to reduce consumption of certain proteins, such as red meat or seafood. However, there is a large degree of individual variability with regard to the influence of these foods and beverages on uric acid in the body, so as always, work with your qualified medical or nutrition professional to determine the dietary approach that is best for you.

Recommended Use: Take one capsule twice daily after breakfast and dinner, or as directed by your health care practitioner. 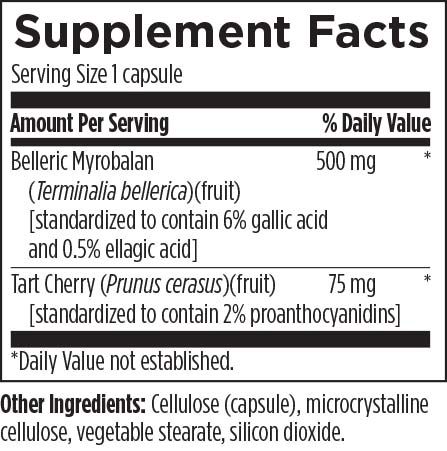 FDA Disclaimer†*:None of these statements have been evaluated by the Food and Drug Administration. These products are not intended to diagnose, treat, cure, or prevent any diseases.