Recommended Use: Take 2 capsules per day with meals or as directed by your health-care practitioner.

Calcium D-Glucarate is calcium bound to d-glucaric acid, which is a natural compound produced in small amounts by the human body and also found in various plant foods such as apples, oranges, and grapefruit, and abundantly in some of the cruciferous vegetables, such as broccoli, cabbage, and kale. Research shows that d-glucaric acid derivatives, such as calcium d-glucarate, help support the body’s defense against toxins and excess steroid hormones, making calcium-d-glucarate helpful for supporting the liver’s detoxification capacity and potentially protecting against suboptimal health stemming from hormone imbalances and overall toxic burden.

During normal liver detoxification, some toxins, including hormones like estrogen, are cleared via glucuronidation – a process wherein a compound called glucuronic acid is attached to a toxin (e.g., excess estrogen) in order to create a substance that is more readily eliminated by the body. In the case of liver detoxification, the substrates are most often xenobiotic substances—things that are foreign to the body, such as pharmaceutical drugs and environmental pollutants—as well as compounds produced inside the body through natural biochemical processes, like excess male and female reproductive hormones, mineralcorticoids, glucocorticoids (like cortisol), bile acids, and more. Theses toxins and hormones, once bound to glucuronic acid, are then ready to be safely eliminated.

Elimination of these compounds that are coupled to glucuronic acid (and are now referred to as  conjugates) occurs through the GI tract, via the stool. Some bacterial species that inhabit the large intestine secrete an enzyme that is capable of de-conjugating these compounds—that is, separating the toxins from the glucuronic acid, which may result in the harmful substances being reabsorbed into the body, rather than being eliminated. One of calcium-d-glucarate’s most powerful effects is in inhibiting the activity of this enzyme, thereby facilitating the healthy removal of these substances.

While the body makes d-glucaric acid and some is also obtained from the diet, due to environmental toxin exposure, hormone imbalances, and issues that may impair the effectiveness of liver detoxification, some individuals may benefit from higher amounts via supplementation with calcium-d-glucarate.

Recommended Use
Take two capsules per day with meals, or as directed by your health care practitioner. 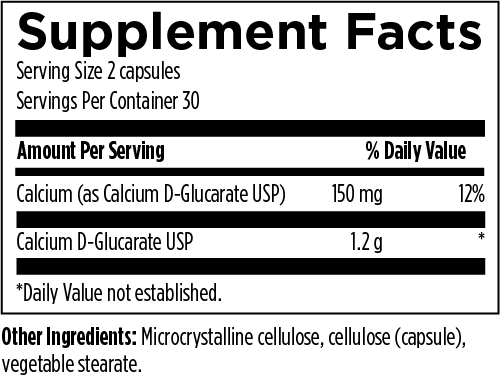 * These statements have not been evaluated by the Food and Drug Administration. This product is not intended to diagnose, treat, cure, or prevent any disease.